HELLO, AND WELCOME TO GOATFISH 2!

Join Goatfish on a DEEP DIVE into 8-bit history, as she tries to discover the names of several classic computer games while EATING as much as she can!

To run Goatfish 2 from disk, insert the disk and type:
RUN”GF2.BAS

To run from tape, insert the tape and type:
RUN”

On the main menu, press I for instructions, C for credits, or any other key to play.

In the game, Goatfish swims deeper and deeper into the ocean looking for delicious food to eat. However, every time she lands on a platform, she will bounce! Reach the yellow “brick” gate to complete a level!

Goatfish’s energy is shown at the bottom of the screen, along with your score. Collect food to maintain Goatfish’s energy and increase your score, while avoiding the angry red faces and large urchins (which will deplete her energy).

As Goatfish’s ocean world consists of platforms, I thought it would be ideal to include a tribute to Larcenas Legacy in the form of a platform tile, so I drew a sprite based on the yellow bricks thrown by Larcenas.

The yellow brick tiles represent the end-of-level gate, and Goatfish must land on it in order to complete the current level. Beware of missing the gate, as danger lurks beneath!

For many years I have been very interested in the sprite scaling effects used in the arcade games of the late 1980s and early 1990s, particularly those used in many of Sega’s classic games.

I have wondered for a long time if it would be possible to create something similar on the humble Amstrad CPC464, which was the computer of my childhood all those years ago.

Goatfish 2 features real-time sprite scaling for all objects in the game world, apart from Goatfish herself. The scaling technique is based on the method used by the Neo Geo console, though of course without that console’s hardware assistance.

Goatfish 2 makes extensive use of compression (often in real-time during gameplay) in order to fit everything into memory. The game uses a double-buffered display, so efficient memory usage is very important. Only two copies of each food, platform and urchin sprite are stored in memory (one on a byte boundary, and one shifted). All the other sizes of each sprite are scaled in real-time from those base sprites.

The code became very messy during a long and difficult optimisation phase, and as a result it is unfortunately quite hard to follow now. A game like this needs to be fast enough to be playable and responsive, so I spent a lot of time experimenting with ideas to make things go faster!

The game design is heavily influenced by the classic game Bounder, by Gremlin Graphics. The gameplay is somewhat similar, though Goatfish 2 is presented from a 3D viewpoint.

I tried to employ careful use of colour to make levels easier to "read" and understand visually, although it does get a little more visually confusing later, particularly on the last level.

Regarding level design, I wanted to pay tribute to a number of classic 8-bit computer games (look carefully and you'll find clues throughout the game).

Thanks to my beautiful wife and daughters, who were very patient during the long development of Goatfish 2.

Thanks to Antonia for designing the Goatfish character, and for the delightful little tune that plays on the main menu – I think she has captured the spirit of the game very well, and I am very proud of her!

Thanks to Zoe for designing the angry red faces and large urchins. She enjoys contributing to my games and I’m very happy that some of her creations are in the game!

Thanks to Fran Gallego and the rest of the CPCTelera team. Without your incredible (and very generous) efforts, none of this would have been possible.

Thank you for playing Goatfish 2, I hope you enjoy it.

Download "source code.zip" from this page, and extract the contents.
Copy the extracted "src" folder into the "gf2" project folder.

To compile, navigate to the gf2 project folder and type:
make cleanall && make

The engine and the gameplay put Infogrames' "The Light Corridor" to shame. Very good work! 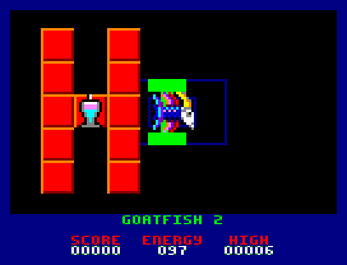 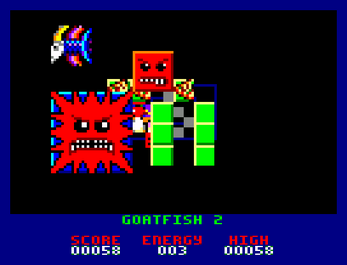 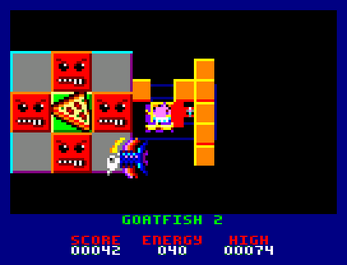 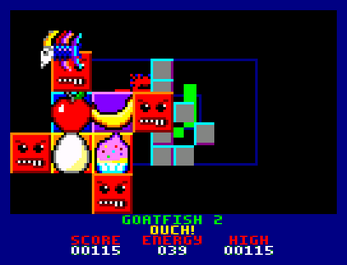